Service Team Blog Press Contact
Want to know more about us and our project?
Subscribe to our newsletter and you will be aware of how our project is developing, what tasks we solve, and just how our team lives.
By subscribing to our newsletter you agree to our Privacy Policy.
Berlin, Germany, October 19, 2020 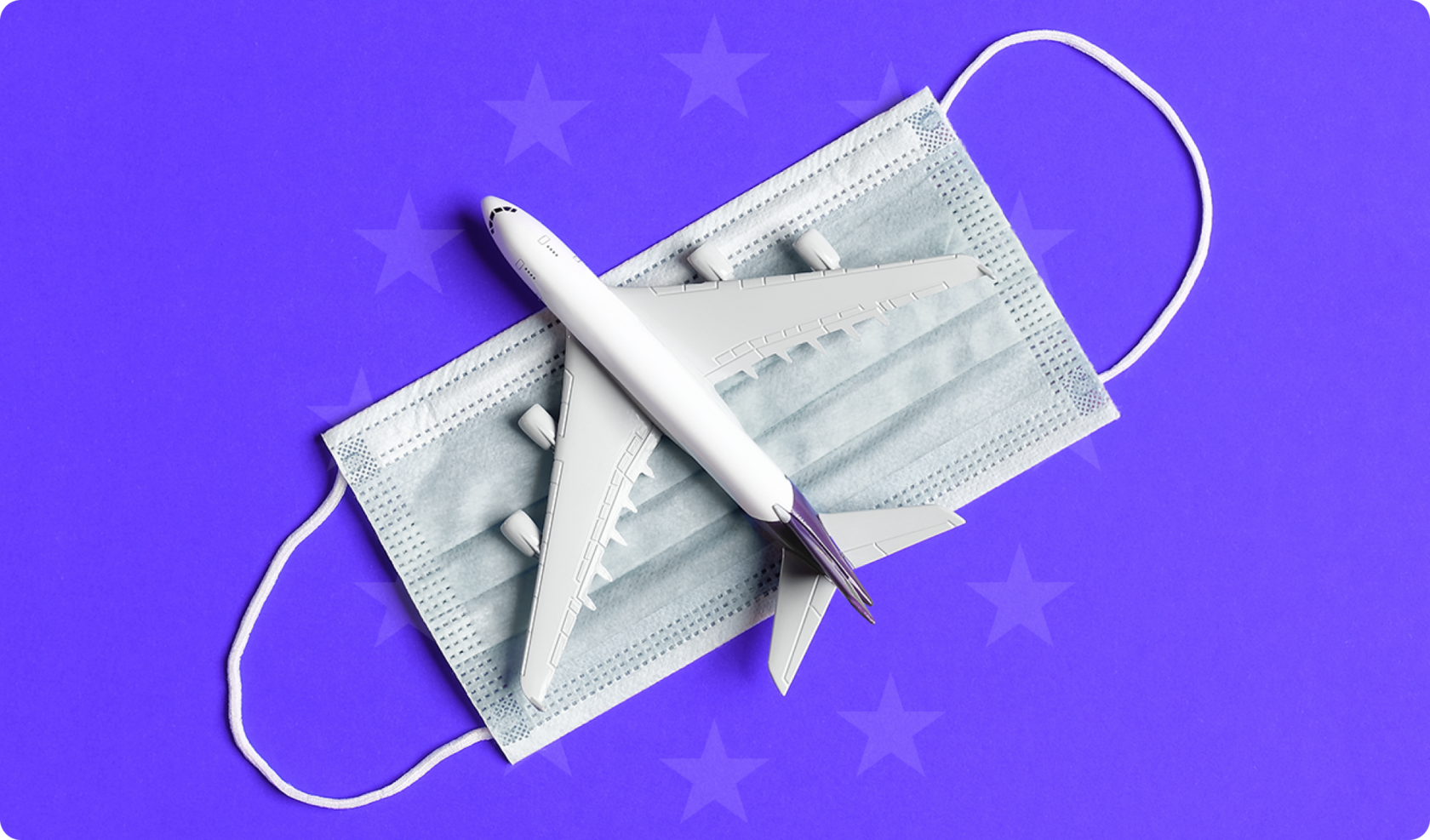 With this blog post we want to share with you a brief observation regarding the Covid-19 impact in aviation and the latest impact due to the present public lockdown of European cities.
The aviation industry during Covid-19
Since the beginning of the pandemic, Covid-19 has shattered air travel demand. Scheduled flights of June 2020 decreased by 65% compared to flights of the same week in June 2019. With further proliferation of the Covid-19 pandemic within Europe at one point governments of several European countries simultaneously announced grounding of the respective airline industry for a couple of weeks.

In Europe as well as all over the world the airlines were the first in the aviation value chain to be hit by the pandemic, forced to go on an aggressive cash preservation mission. Airlines rapidly started to reduce capacity by canceling already scheduled flights and grounding their fleet afterwards. Moreover in order to reduce costs airlines also furlough employees and seek government support. Prior to the worldwide grounding the International Air Transport Association has predicted airlines are likely to lose €75 billion this year alone and foresee even higher loss in the upcoming years.

The French and Dutch governments are supporting Air France-KLM with €7 billion and €3.4 billion in order to keep them "alive and operating" during the crisis. Germany for instance has helped the Lufthansa Group with a €9 billion bailout. Nevertheless they have been in the front row of pleading with member states to reopen.

As approaching the end of the crisis phase, carriers tried to shift their focus from day-to-day crisis management to planning for restart of operations. As markets began to reopen everybody in the airline industry knew about the challenges to come - Processes that typically took weeks to complete now must run on a weekly, if not daily, basis. The classic business models were not profitable anymore and everybody was searching for other opportunities, e.g. by converting pax-transporting aircrafts to freighters. In addition to support airlines some international rules were relaxed so that airlines did not lose their route slots even if they were not able to serve them accordingly.

This crisis severely affected the most airlines worldwide. However, each operator's positioning to deal with the crisis varies in terms of existing capital structure, as well as government and shareholder support.

The lease business also was heavily impacted by the crisis. For most operators/lessees it was helpful that several lease deferrals were available, typically for a period of 2-3 months as an initial support package. I turned out that this was not long enough since lessors are now forced to provide further rent relief or early lease termination. This leads to huge revenue reductions and increased exposure to deferred income from riskier lessees.

Some flexible solutions were required in order to mitigate the resulting risks during the crisis:

The crisis shows that every player within the aviation business was facing major revenue reduction and forced everybody to overthink their general strategies and come up with never before seen flexibility. This was not only demanded by the aviation community in general but also from the respective governments. In addition it was noticed that reduced asset values and rates limited asset remarketing and caused a deceleration within the trading and MRO business as never seen before.
Relief and European lockdown
In summer 2020 the announcement that airlines are allowed to operate again caused a big relief within the commercial aviation industry. However everyone knew that going back to daily business will not be possible for a certain amount of time. The corona induced wounds needed to heal first. Airlines, MRO´s and Lessors suffered a huge revenues loss and amended their own strategies and business forecasts accordingly. There was still an anxiety of the upcoming months since the corona virus did not disappear and a vaccine was not yet developed. The airline industry for example incorporated new safety and health corona-standards in order to offer the best transportation services possible. An utilization during corona of 60-70% was likely to reach by the airlines.

Especially in the European region where most of the commercial flights were used for vacation purposes the restart of airline operation was very much noticeable.

During the summer time in 2020 it looked like the worst was endured and with new travel regulations in place regarding health and safety the European population enjoyed the variety of cultural destinations.

In October 2020 the virus spreading in European cities increased dramatically leading to another lockdown. This time however the aviation industry was not forced to ground aircrafts immediately. The actions taken by airlines in terms of new travel regulations and the experience gained throughout the first lockdown period led to a continuous airline operation. However the initial flight schedules were reduced drastically again, stating that the majority of European airlines are flying an 30% utilization with reduced capacity.
Adjusting to 2021
As stated above it was noted that several important aviation assets such as aircrafts or engines faced a value loss and reduced lease rates. For that reason the trading market is very limited and makes it difficult for remarketing purposes. Moreover lessors are often reluctant to initiate aircraft repossessions due to the decreased remarketing options. If airlines enter bankruptcy, repossessions will tend to becoming more frequent. The risks are that lessors will then face significant costs and revenue impacts. The time the market will upswing, lessors will face challenges between getting the aircraft onto lease at low rates and longer downtime of their assets while waiting for rates to improve.

The following additional risks were identified by several experts and aviation consultancies:

Despite of the Covid-19-environment the expert opinion remains the same:

The aviation industry will recover completely and continued growth of the lease business is assured.

Follow us!
By following our posts, you will get to know the product, follow the development process and be the first to know about newly incorporated features. You can provide your comments and proposals and thereby participate on the continuous improvement of the platform for the benefit of all existing and future users. We would like to establish an interactive relationship with our readers – independent of whether you use the platform or not.

We are there for you anytime to answer all your questions and to listen to all your proposals as well as criticisms. All your feedback is very much appreciated. Just let us know at hello@aeroji.com or on any social network.

We wish you a relaxing and safe weekend.